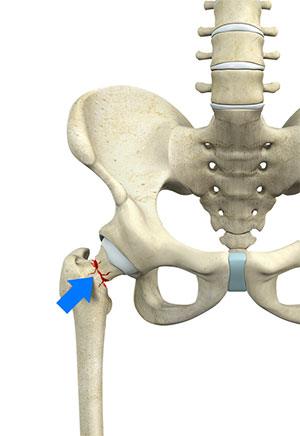 What is Femoral Neck Fracture?

The hip is a ball-and-socket joint made up of the head of the thigh bone or femur that acts as the ball and fits into the rounded socket of the hip bone or acetabulum. The neck of the femur is the region just below the ball of the hip joint.

Femoral neck fractures can occur with

The symptoms of a femoral neck fracture include:

Femoral neck fractures are diagnosed based on physical examination, your symptoms and circumstances of the accident.

Your doctor will order an X-ray to diagnose a femoral neck fracture. Your doctor may also perform other imaging tests such as the magnetic resonance imaging (MRI), and computer tomography (CT) scan to obtain further information.

Radiographic image of a broken shenton's curve, which shows the relationship of the femoral head to the acetabulum, indicates a femoral neck fracture.

Treatment of a femoral neck fracture will depend on your age and the extent of displacement of the fractured bone.

Conservative therapeutic approaches are suggested for uncomplicated fractures and include bed rest for a few days followed by a physical rehabilitation program after 2 or 3 days. Your doctor may also prescribe medications to prevent blood clots, relieve pain and treat any infection that may be present.

However, femoral neck fractures are rarely stable enough to manage with only conservative therapy and usually require surgical repair.

Surgery for a femoral neck fracture is performed under general or spinal anesthesia.

Hip pinning is recommended if your facture is minimally displaced and you have sufficient bone density. Your surgeon will make a small incision on the outside of your thigh and insert several screws to stabilize the broken bones.

Total hip replacement is recommended if you have had arthritis of the hip before the fracture. Your surgeon will replace the femoral head as well as the socket of the hip joint with artificial metal implants. 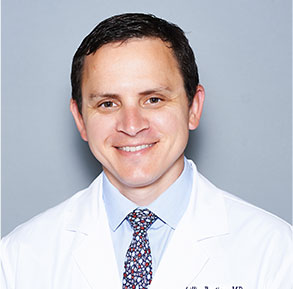